Some Selections from Carlos Colón's Requiem

"He Giveth His Beloved Sleep" at Baylor University

Note: This essay was commissioned for Transpositions, a collaborative effort of students associated with the Institute for Theology, Imagination, and the Arts at the University of St Andrews, Scotland

One day in 1980, I opened the door of my house in my quiet little town in El Salvador to find commotion in the neighborhood. We were in the middle of an escalating civil war, and this morning the paramilitary death squads had left ten decapitated bodies along our otherwise silent and picturesque street.

A couple of years earlier I had joined a Christian community which had become a loving family. My Christian pilgrimage started in this juxtaposition of the horrors of war around me and the joy that had come to my life as I learned to worship God with a group of people who modeled and embodied God’s beauty even in time of war. The rituals that set the tempo of our community life were simple: prayer, communion, singing, and the reading and proclamation of Scripture. I had found consolation in the words of Scripture since I was a very young child, despite the fact that I grew in a non-religious home. Reading the Bible in community was an even greater consolation, but the singing of hymns and Psalms was one of the main reasons that I was at that little church each time the doors opened.


Today, as a full-time composer working in both sacred and classical idioms, I draw on biblical and theological as well as musical traditions to write music that speaks to our world’s violence as well as its beauty. In Bach’s music I hear the echo of the heavens. His work has guided me in matters of tonality, modality, and counterpoint. But more vitally, he inspires me as a composer grounded both in the classical and Reformation traditions, which give theological grounding to the texts he employed in his compositions. Bela Bartok’s music sounds to me as earthy as the brown skin of my people. I feel his influence not so much from his sonorities, but from the way he allowed his music to be haunted by the music of the ethnic groups around him.

But my important influences are as much theological as musical. As I have watched my country struggle to deal with the legacy of our civil war, I too have been on a journey into some dark places. My supports and guiding lights have always been Scripture and liturgy. Ancient and new work in theology, the liturgical practices of my church, and my lifelong journey deeper into the Scriptures, have shaped how I come to terms with the suffering I have seen during my lifetime.

I wrote my 2008 requiem Las Lamentaciones de Rufina Amaya in memory of the more than 800 villagers (mostly women and children) of El Mozote massacred on December 10-11, 1981, by the Salvadoran army. The lone survivor of El Mozote, Rufina Amaya, lost five children under the age of eight during that massacre. After spending time as a refugee in Honduras, Mrs. Amaya came back to El Salvador, even before the war ended, knowing that she had to tell the world what she had seen. To our astonishment, she forgave the perpetrators of the crime. She even opposed the execution of some of the men who took part in it, according to what her daughter Fidelia told me last year.

The piece opens with a text that the Church has chanted in Tenebrae services for centuries, from the first chapter of the book of Lamentations:

Is it nothing to you, all ye that pass by? Behold, and see if there be any sorrow like unto my sorrow. (KJV)

The text of Las Lamentaciones de Rufina Amaya is a combination of Scriptures, poetry by Salvadoran poet Nora Mendez, and the prayers for the dead in the traditional requiem service. Performances in the United States and El Salvador have not only drawn attention to this atrocity, but also to the redemptive power of truth-telling and forgiveness. For the Salvadoran premiere at the Catholic University of San Salvador, I added a song of remembrance called “Love Shall Overcome” based on Romans 12:21, “Be not overcome of evil, but overcome evil with good.”

For the thirtieth anniversary of the assassination of our beloved Archbishop Oscar Romero, I was commissioned by El Salvador’s First Lady to write a composition in memory of Romero’s martyrdom. That same day, President Mauricio Funes asked forgiveness, in the name of the state, for the magnicide. The piece, Obertura Para Un Mártir, is scored for Choir, Orchestra, Tenor, and Narrator. The piece celebrates Romero’s life as a priest and his connection to the intellectual and contemplative traditions of the Church. Romero, a shy and reluctant leader, became a courageous voice for the poor in El Salvador. But the fact that Romero was also a deep man of prayer is seldom mentioned by those who only focus on his fight for social transformation. In the composition, a tenor portrays Romero and sings text directly taken from his homilies. These homilies document his transformation from pastor to prophet, including his famous words to the Salvadoran army that would lead to his assassination:

Although these works are grounded in the recent, shared experience of war in my country, they are relevant wherever oppression and violence have been felt or mourned. My prayer is that, as my compositions are performed in concert halls and churches around the United States and Latin America, they bear witness to the enduring power of beauty to transform barbarity, of love to overcome rage, and of the Word of God to both challenge and comfort.

Carlos Colón is a composer and cultural promoter, specializing in music that is both academically serious and ecclesiastically valuable. His recent projects lie at the intersection of social justice and religious change. He is a Resident Scholar at the Baylor Institute for Studies in Religion, and an Artist-in-Residence at Armstrong Browning Library at Baylor University in Waco, Texas. One of his recent commissions was an anthem, premiered during a recent conference celebrating 400 Years of the King James Bible at Baylor University.
Publicadas por Carlos Colón-Quintana a la/s 07:07 No hay comentarios.: 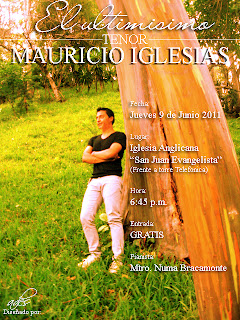 From the concert "Southern Harmony" at Baylor University.

Let Us Cross Over the River by Carlos Colón: